The long deep ocean is a huge place, where lots and lots of more incredible and unkwonwn creatures are hidden. They are like a sands that hides in the ocean below.

A few of brave and lucky divers were lucky enough to witness and swim with one of the known gigantic sunfish that was found in one of deep ocean. For over 10 minutes, these divers followed the giant sunfish as it swims in the deeo ocean. 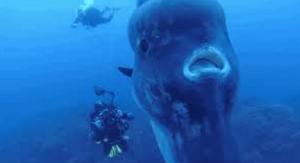 Called to be Sunfish is one of a kind exotic in Japan, Taiwan and Korea, but when comes in the seas of the EU this is only a regular one when it comes to these fishes. It has been protected by the government.

A guy namely, Miguel Pereira talks that the sunfish was not bothered by their presence it was even following them the whole time.

However, It was not the first time that a sunfish was taken to a shoot! Going back, there were some divers on the Portuguese areas whose breaths were taken because of the giant sunfish.