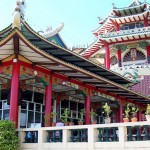 If someone thinks about Cebu and where to go, the “Gong, Guan or Miao in Chinese” or the Taoist Temple in Cebu City is one of the best tourist attracttour in the city. Because of its many tourists destination attracttour, Cebu became the world’s leading trade industry in the country.

Taoist Temple is one of the religious ritual centers of the Chinese people -Taoism. It is also open to both worshipers and non-worshipers regardless of race and individual beliefs.