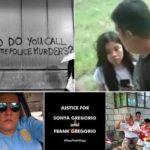 A shooting incident happened in Paniqui, Tarlac involving Police Senior Master Sergeant Jonel Nuezca who killed a mother, Sonya Gregorio, 52, and son, Frank Anthony Gregorio, 25, both are victims who were shot to death.  The shooting that was caught in the video is now viral on social media. According to the report of the … Read more