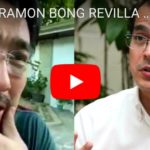 MANILA, Sen. Bong Revilla reacts on Mayor Isko Moreno wherein the Mayor address to him and to his fellow Senators “mga wala kayong, ginagawa”. According to Revilla” he and his fellow lawmaker was hurt about the messages and stated they were in the legislative branch and the Mayor was assigned on the executive side, which … Read more